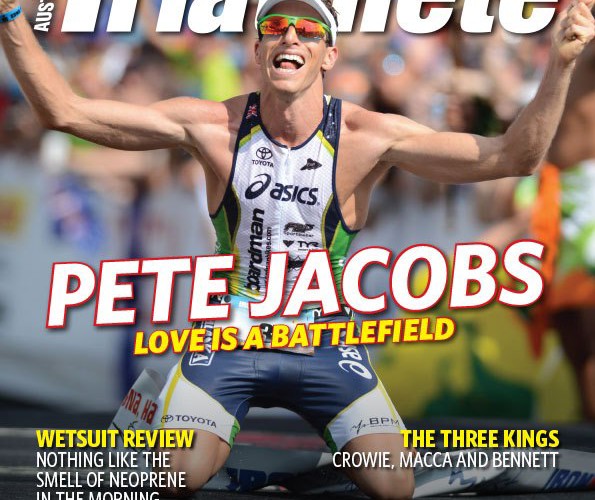 Growing up, everything was a competition between brothers Tim and Pete Jacobs. Tim, a passionate paddler and NSW Institute of Sport coach, is four years older than his brother Pete, a professional triathlete and 2012 Ironman World Champion. Their passion for being active came naturally and they were both talented at similar sports, creating even more rivalry. Pete confesses that he often tried to keep up with his older brother and Tim always pushed him to train harder, get stronger and ‘toughen up’. Although they never competed against each other in sport, there was one thing regularly contested for: the front seat.

“The most common competition we had was to race for the car to get the front seat,” Tim says. “Seeing as I was four years older I had cunning on my side and won most of the time.”

In addition to Tim and Pete is their sister Jacqui. Tim describes her as the only ‘sane’ child in the family because she doesn’t race. But he ensures that she is equally as competitive, if not more. Competitiveness and exercise came naturally to all three siblings, and television and computer games were rarely thought of. Instead, they ran around at the park with a football in hand or cruised the streets on their bikes. By the age of three, each of them had learned to swim and their love for the water only grew.

Tim admits, though, that there was a downside of growing up in the Jacobs household: vegetables. If they didn’t finish them, they had to sit outside until they were all gone.

“When I was a kid I thought we were ridiculously healthy,” Pete says. ‘”Looking back, though, we still had our ice cream after dinner and we still had our treats, just not as many as the other kids.”

Parents Jen and Geoff never pushed their children to be active, but they always led by example. Jen was a passionate triathlete and Geoff a talented tennis player. They raised independent and strong children; two characteristics that have proven vital for Tim and Pete in competition. Tim credits many of the tough races he has pushed through
to the resilience his parents taught him and the natural competitiveness that developed when growing up. Pete is much the same, viewing his parents’ support as the biggest influence on his lifestyle today. They were always there
for him when he was struggling with fatigue or unable to race or train. He admits, though, that becoming a world champion probably surprised his mum and dad.

“A decade ago they never would have thought I
would have gotten to that level but they supported me nonetheless,” Pete says. “Their unwavering support and love was what really helped us.”

It was later in their lives when their interest in nutrition developed. Being young, growing boys they could eat as much as they liked of anything and still recover well. In their mid-20s they needed to become smarter about what they fuelled their bodies with and had to start to look after themselves better. Generally, Pete eats the same thing both during training and prior to race day: brown rice, beans, olive oil and nuts. Tim always fills his body with enough protein, carbohydrates, good fats and sodium before a race and, like Pete, sticks to food his body is familiar with. After all, there is nothing worse than having something sit uneasy in your stomach as you race.

“Before a big race I go with what I know, nothing new,” Tim says. “Something that will sit comfortably with me, give me the knowledge that what I just ate will make me feel good when racing and give me the fuel I need.”

Tim and Pete have both learned that the more serious you are about managing your diet and energy levels, the more likely you are to succeed. Good, consistent food and maintaining hydration are Pete’s number one tips. Prior to a race he always rehydrates with an electrolyte drink and uses gel to manage his energy; always maintaining these routines while travelling or competing overseas. Both Pete and Tim’s top tip is to always eat

to the best of your ability. Plan ahead, especially if you are away from home; find somewhere to stay that has a self-contained kitchen and know exactly what you want to accomplish before you get there. Planning means
you are more likely to succeed in achieving your goals because, as Tim reminds us, what you eat, how you treat your body and who you surround yourself with will govern how you feel and perform.

“You need to be a little selfish when you are an athlete because at the end of the day no one else is out there but you,” Tim says. “Each night I go to bed with a plan of what I want to get done the following day, this ensures that I don’t waste time with things that will not benefit my racing.”

Tim’s most valuable lesson he has learnt over the years, though, is that you need to remain flexible and prepared for anything. Paddling exposes him to unpredictable elements: wind, heat, waves and currents, to name a few. Incorporating variation into training is a great way to allow you to perform at your best no matter the conditions or unavoidable changes to your plan.

Pete’s number one lesson, however, is ‘less is more’. He believes that sometimes doing less training will ultimately get your body in better shape, and has learnt that listening to your body is the only way to prevent overtraining and ensure sufficient recovery.
Both Tim’s and Pete’s achievements reveal the importance of being a positive role model and encouraging younger generations to live active and healthy lifestyles. Growing up, competition was always fun for the Jacobs boys, whether it was trying to get a set off their dad in tennis or pushing each other during surf lifesaving training. That passion for healthy competition as kids has undoubtedly shaped the brothers into the men they have grown to be today, and there is little doubt the front seat still gets contested for every now and again!