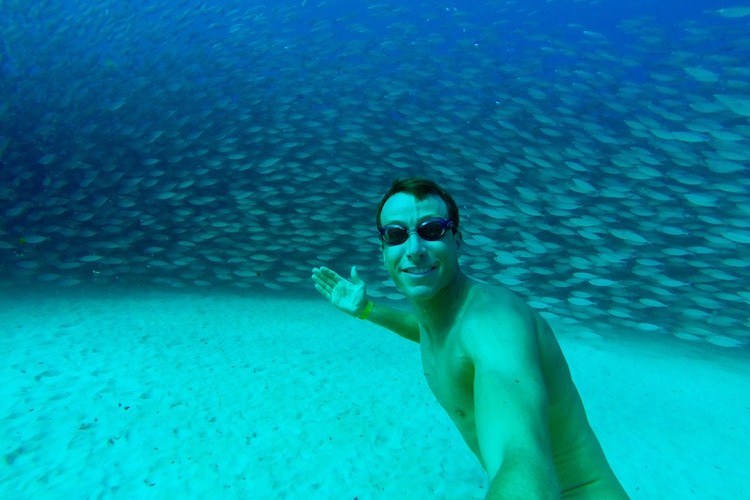 Bring your sunscreen, swimsuit, and some good clear goggles. The water in Kona is the best.

Down time in Kona for the competitors, their families, and everyone else visiting for the race is an exciting time. And with the warm Hawaii weather the best place is by the ocean, or in it. Turtle Beach is a great protected bay, sometimes a little wave to rent a surfboard/SUP for, but mostly because there is an abundance of turtles there. It’s towards the end of Alii drive. On your way there you’ll pass another nice beach which usually has a bigger wave, but dumping on the shore. And of course the beach in front of the King K hotel (race recovery area) is nice for a relax, but the water on the other side of the pier (race start) is clearer. If you want to have a proper swim out along the course and a better chance of swimming with dolphins, and getting a coffee from the coffee boat, then go early while the wind is calm and not so many people to dodge. But the masses of people do add to the vibe, so enjoy standing around in your swimmers showing off what your body has become as a by-product of training and catch up with old friends/rivals or snap a photo with your idols.

The most important stuff. Food. For those who want something really healthy, and tasty, the fresh, raw fish is unbeatable. There are two Poke places in Kona, one is about 3 mile along Alii drive (Poke Shack), the other is on Hualalai road (Umeke’s, which is also at two other locations). For a fancy dinner, it’s hard to beat Kona Inn. It’s a beautiful setting, on the ocean side of ALii drive right in the middle of town, and would also be a great place for lunch.

For the unhealthy treat, the froyo (frozen yoghurt)(full of sugar/flavourings, but pretty awesome) place near the Big Island Running Co. shop is open late, but maybe leave this stop till after the race. There’s a nice coffee shop over the water on the middle level near Bubba Gump’s, and then there’s Lava Java of course, which you will see getting more and more packed as the race draws closer. Then one of my favourites is Chipotle, but there is no chipotle in Kona, but there is another Burrito franchise which is pretty good. One of the stores is out on the Queen K highway, just before the energy lab, the other is on Makala Blvd, on the bike course between the swimming pool and the queen K. There’s plenty of other options too, so go for a wander and try a few things out. I definitely left a heap of great places out.

Make your own food too by buying great fruit and vegetables at the markets (opposite where the expo will be), and when you shop at Safeway ask to become a member to get big discounts straight away (not sure if it matters, but have a fake phone number and address ready to write down if you don’t live in the USA).

The nightlife in Kona is awesome, that’s when the enormous manta rays can be seen and swum with. Floating out in the water at dark can be a bit daunting, and cold, but it’s well worth it to have a close encounter with these harmless and fascinating creatures. There are a few bars/bistro’s for after the race, but mostly it’s all happening down along the finish chute. So grab some pizza and drinks and sit along the run course watching the unforgettable scene of the “back of the packers” who are out there all day and still running while you relax and enjoy your achievement. After the awards there are several bars, Lulu’s is very popular and gets full, so does Huggo’s (usually you need to be on the list so look out during the week for who’s sponsoring it this year).

There is a tonne more I haven’t mentioned so just keep your ear to the ground, ask people you know who have been here before, and relax, soak up the vibe, and make some great memories on the Big Island.

See you around town or at the beach 😉

P.S. next blog is tips for the racers in race week. I’ll put it up Saturday.