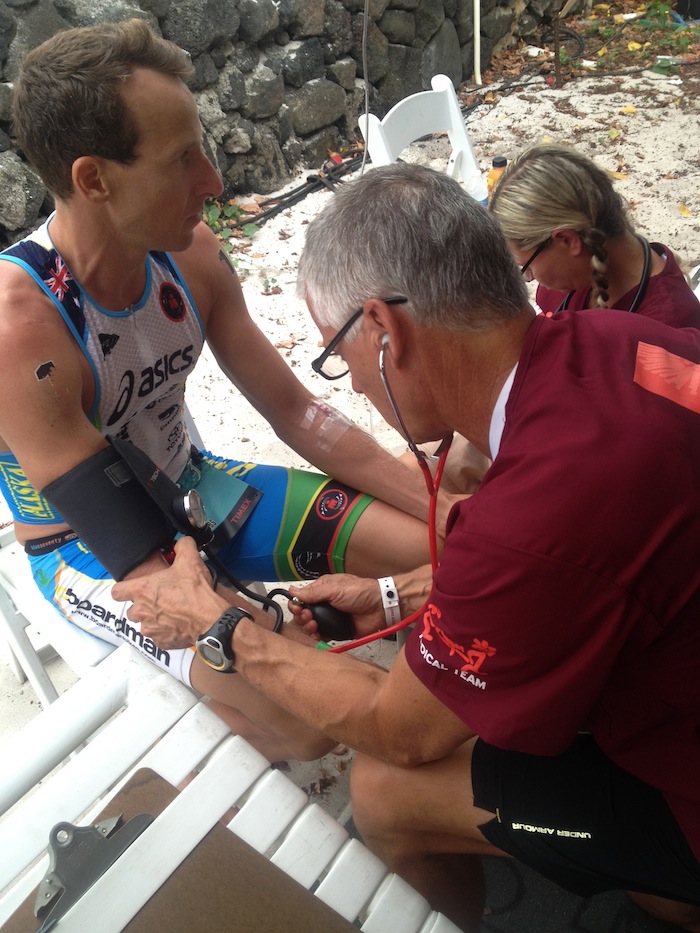 An Insight from the Passenger Seat – Kona 2013

I’m writing this from an Hawaiian Airlines seat en route to Brisbane – destination Noosa (aka sanity). We’re nearing the bottom of our non-roasted non-salty almonds and on the hundredth bottle of water with the electrolyte, sodium, magnesium goodiness that Shotz delivers. At this very moment the captain has said (for the 3rd time mind you) prepare for heavy turbulence – eeeekkk.

We arrived on the 2nd of October onto the Big Island, 3 days earlier than normal armed with a full media schedule, family and friends and the knowledge that something great was about to unfold. The Hawaiian Ironman World Championships for 2013.

Returning to Kona in July for the Honu 70.3 was surreal. This time in October it was exciting and due. I got to see the pride in Pete as he proudly donned the returning World Champ title on the very island, wearing the number 1 for race day, and the slight surprise still in his eyes when a passer by would say “I was cheering you on last year” or “can I have a photo with you”. I got to witness first hand the “family” ideology around Ironman, whether it’s your immediate, or commercial family, it is just that. Not a minute went by where you didn’t see or hear a mother, father, wife, husband, sister, brother, friends, race organisers, our sponsor family (no, not third world, Boardman, Asics etc) encouraging, or helping one another.

A tight knit community that irreverently centres around a solo pursuit – to cross the finish line as efficiently and effectlivley as possible – yet is a community of selflessness and self sacrifice simultanously. As Richard Branson often stresses in business, the importance of companies working together and supporting eachother in an effort to build a sustainable future economy wise and eco wise. This is Ironman.

To paint the picture if you didn’t get to the Big Island this year. You have the worlds best traithletes who breathe the sport 24/7 working to justify their mission, media that cart kilos of camera equipment around losing litres of sweat in the process all in an effort to get that kick of adrenalin that race day produces back to the masses, volunteers that stand on aid stations for 17hrs straight amongst the unrelenting lava fields, race organisers that plan logistics for 364 days of the year only to wake up and do it all over again and loyal family and friends that will fly to the moon and back if it will assist their athlete in the lead up to race day. Poke was the food of choice with the Lava Java shake being a daily consumption.

The week leading up to the race was a mad mix of media and sponsor commitments, light training (Pete and I both swam in the 3.8km training swim crossing the line first man and woman) which I might add included swimming with dolphins, riding on the Queen K behind both Pete and Sebastion Kienle (awful view – not) :), establishing a first name relationship with SafeWay, and discovering that I like driving a people mover on the wrong side of the road way too much!

Race morning came and went in a blur, trepidation of what was about to unfold sat like a too quickly consumed burrito (new fave food) in my stomach. News of Pete getting out of T1 first gave me relief thinking he is off the front where he races best. A third into the bike news came that Pete went from 2nd to 15th in a split second, getting out onto the Queen K to watch the run leg made my heart break. Pete had nothing, my shouts of “love you hun, well done” got a mere head shake with pain and dissapointment dancing menacingly in his eyes. On one hand I felt proud for Pete was finishing what he came to do, it wasn’t about the next race, it was about taking on Kona and seeing it through to the end. On the other hand  I felt a sudden anger and helplessness, anger at this sport causing Pete’s pain and I couldn’t do a single thing out there to relieve it. Heading back into town we got word that Pete had teamed up with another Aussie Luke Bell, that they were seen walking together and joking around to get one another to the finish line.

2 drips later for Pete, many tears (confronting seeing your loved one hooked up to a drip looking near dead), and a couple of Mai Tais Team Jacobs was back to normal – if you can call us that.

Waking up the next morning it all seemed like a dream. Last year was filled with exhilaration and with an almost fairy tale substance. This year was different. It was one of dissapointment for Pete, for us as supporters it just clarified the enormity of what Pete achieved last year and reiterated the true champ Pete is by his reaction to his result this year.