Pete Jacobs was no stranger to the top-10 finishers’ stage in Kona, having visited it three times before last year as the runner-up behind Craig Alexander.

But 2012 was Jacobs’ year. The 31-year-old Australian, who hails from Sydney, won his maiden Ironman world crown with a time of 8:18:37 – five minutes ahead of Germany’s Andreas Raelert.

The 3.8km ocean swim in Kailua Bay, 180km bike ride through the lava fields along the Kohala coast and 42km run through Kailua Village onto Queen Ka’ahumanu Highway were planned with precision. Even so, when he left T2 he was over eight minutes behind Belgian powerhouse Marino Vanhoenacker. Here we discover how Peter found that

You said after the race that you really felt yourself sharpening up over the last three weeks. How soon into the race did you know that you had the extra gear that you didn’t have in the last couple of years?

It was around 30km into the bike. There were a couple of sections along the Queen K where it was pretty flat and I was sitting back in about 10th position. I

kept thinking to myself, ‘This is easy. If I could get to the front I think I could really pick this pace up.’ But getting to the front is a whole different story. If you time it wrong and suddenly the pace picks up, then it can take a long time to get up there. You can’t just slot in unless there’s a real big gap between two guys. So I had to be patient.

Luckily Luke McKenzie [fellow Aussie who’d finish 25th] went up the road and broke the pack apart a bit – that made some holes for me to move into, and then I bridged up to Crowie. When I did that and saw that Crowie and the rest of the guys were struggling to stay up with me, my confidence just grew and grew.

Was there a moment late in the bike or early in the run – when Marino [Vanhoenacker] had that huge gap – when you thought, ‘He’s too far up the road, I can’t catch him?’

Only once really. It was just before halfway on the run, right as we hit the Queen K after coming up Palani. I only made up a couple of minutes on Ali’i Drive and I thought, ‘Wow, this guy is really holding his own. I’m not sure how I’m going to make up this gap and I’m not sure I can’. I sort of accepted that the better man had won. He’s a supreme athlete and there wouldn’t have been any shame in losing to a guy

like that. But then after a couple of kilometres I heard that the gap was coming down very quickly. I caught him just a little after halfway, and then he stopped to dunk his head in an ice bucket at an aid station.

Was there any point on the way back into town where you felt your wheels were coming off a bit and [Andreas] Raelert might be able to catch you in the last 5km?

I never really felt like it was all going to fall apart. Even when I felt really good I held back a little, for sure. I never really let myself go all out. I wanted to make sure I could hold the pace I was running through the finish, while keeping a little something in the tank in case someone made a big push at the end.

Over the last 10km I walked at least a small section of every aid station just to make sure that I got enough ice and all the fluids I needed. I just wanted to keep my temperature down at that point and stay in control.

“EVEN WHEN I FELT GOOD, I HELD BACK A LITTLE, FOR SURE. I NEVER REALLY LET MYSELF GO ALL OUT.

What was the very first thing that popped into your head the following morning?

Was there a moment of disbelief, as if the day before hadn’t really happened?

Absolutely. For a split second I thought it might just have all been a really good dream. It still hasn’t sunk in completely and there’s a part of me that thinks I did dream it. The first thing I did was look at Jami [Pete’s wife] and thanked her for everything she’s done. Then we flipped through some photos from the race on Twitter and Facebook to see that it really was me who came down that finish chute in first place. That helped it sink in a little more, but I’m still struggling with it.

Which parts of your race do you think you can still improve to come back an even better athlete next year?
I think I could improve the back end of the ride a little bit. I think with a little more bike fitness I could ride stronger towards the end. And also right at the start of the bike. Those first 10 kilometres of the bike – when we’re riding around town – people get bunched pretty tight and aren’t necessarily abiding by the rules. I fell back a little too far at that point. I think

I was around 12th place by the time we got onto the Queen K and that was a slight disadvantage. Next year I have to work on staying near the front on the first stretch.

As for the run – I did what I needed to do. I had a tight lower back – my hips were a little stiff on the bike and that just pulls on my spine – so there was that little weakness. If I dismounted the bike alongside some of the stronger runners, that tightness might have

tested me at the start of the run before it loosened up. I could definitely work on strength and flexibility in my hips so I can leave the bike feeling a little
fresher. To be able to have the kind of bike ride I had this year [4:35:15], with the kind of run I had last year [2:42:29], would be my absolute perfect race.

You’re only 31 years old. Is there a part of you that’s already looking at Macca’s two titles or Crowie’s three? [Laughing] No, no. I haven’t given any thought to getting another title just yet. Like I said, it doesn’t seem real that I’ve got one, so it’s going to be a long time before I let myself even picture winning another one. This one is a dream come true. Right now I can’t even think about number two or three. I’m obviously going to come back and try even harder to be in better shape, but I have no thoughts of a specific number right now, or of trying to match what my countrymen have done. 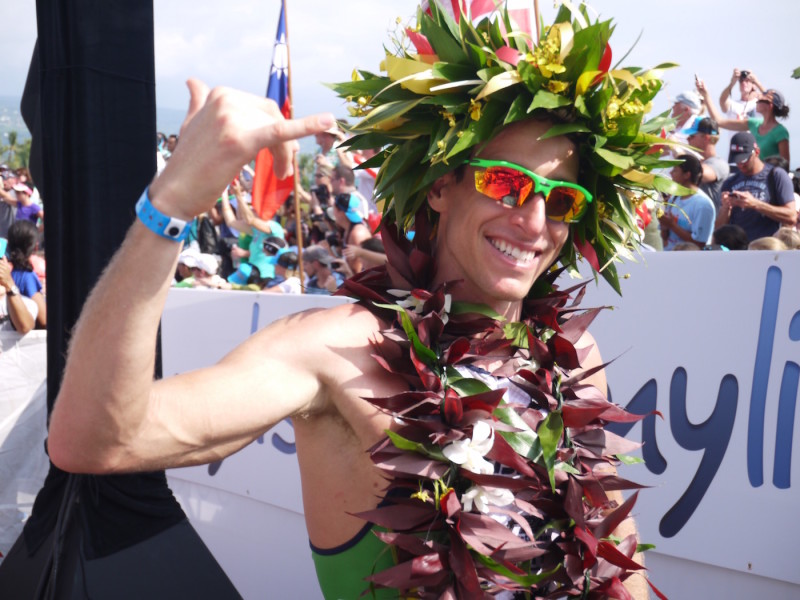 Above: Euphoric at the finish line after a gruelling 8:18hr effort

It was Groundhog Day in Kona as the USA’s Andy Potts clocked the fastest swim split of 50:32mins. Pete Jacobs was part of the 20-strong pack that followed power-swimmer Potts out of the water less than a minute later. Germany’s Andreas Raelert missed the lead group by 4mins but Belgium’s Marino Vanhoenacker stayed in contact and was soon pushing the pace out front.

By Hawi corner, the Belgian was ahead with 70.3 World Champion Sebastian Kienle. The conditions were increasingly windy and puncture problems soon set Kienle back 5mins. So it was left to Vanhoenacker to head for T2 alone and with an 8min lead over the chasing pack of Jacobs, Dirk Bockel, Frederick Van Lierde and Faris Al-Sultan.

At 16km on the run Vanhoenacker’s lead over Jacobs had dropped to 5mins. It would take a further 9km for Jacobs to catch and pass the Belgian, leaving the Aussie in the lead… to the finish.

Jacobs became the youngest winner since a 27-year-old Faris Al-Sultan won back in 2005. Behind him, Raelert recorded the fastest run (2:47:23) to finish second. Reigning champ Craig Alexander came in 12th, while Vanhoenacker pulled out mid marathon.