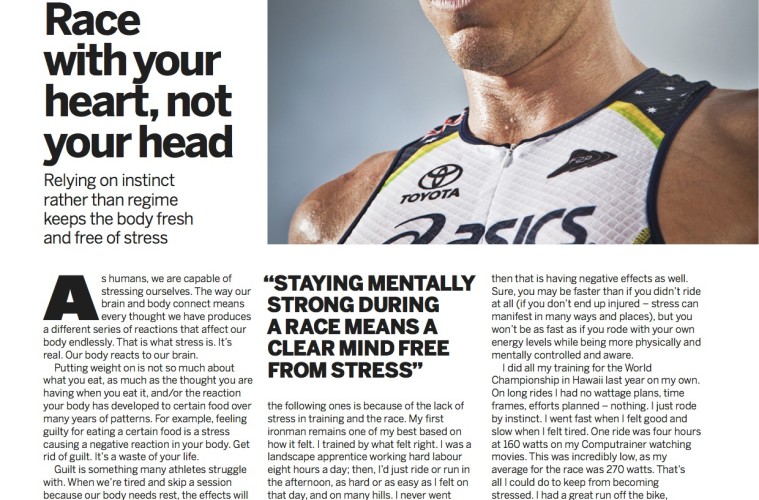 RACE WITH YOUR HEART, NOT YOUR HEAD

As humans, we are capable of stressing ourselves. The way our brain and body connect means every thought we have produces a different series of reactions that affect our body endlessly. That is what stress is. It’s real. Our body reacts to our brain.

Putting weight on is not so much about what you eat, as much as the thought you are having when you eat it, and/or the reaction your body has developed to certain food over many years of patterns. For example, feeling guilty for eating a certain food is a stress causing a negative reaction in your body. Get rid of guilt. It’s a waste of your life.

Guilt is something many athletes struggle with. When we’re tired and skip a session because our body needs rest, the effects will be nullified if we spend the entire time worried about the fact that we’re resting. Your body knows what’s best for you. Your brain, however, sometimes does not.

Training for triathlon should be fun, exciting and chaotic (not too routine, linear or planned). Racing is meant to give you a rush of adrenaline and a feeling of euphoria. If you are putting expectations on yourself and during the race you don’t feel you are achieving them, there is only one way you’ll go, and that’s backwards. Staying mentally strong during a race means a clear mind free from stress, and that’s what keeps your body functioning at its best.

the following ones is because of the lack of stress in training and the race. My first ironman remains one of my best based on how it felt. I trained by what felt right. I was a landscape apprentice working hard labour eight hours a day; then, I’d just ride or run in the afternoon, as hard or as easy as I felt on that day, and on many hills. I never went searching for a dead flat road to practise on my TT bike, or stress if I couldn’t get there. I didn’t even have a TT bike. Just doing what you can and what your body is telling you, and being content with what you do, is what will get your body in the best shape.

Your body is stressed once expectations cause pressure. Training with other people can either help or hinder. I mostly think it hinders. What are the chances that two people are going to have the exact same fluctuations in their energy levels and pace over a five-hour ride? If you are going easy to stay with others, you are wasting your time. If you go too hard to stay with people and ride a majority of the time in an uncomfortable headspace, causing your body to tense up, then that is having negative effects as well. Sure, you may be faster than if you didn’t ride at all (if you don’t end up injured – stress can manifest in many ways and places), but you won’t be as fast as if you rode with your own energy levels while being more physically and mentally controlled and aware.

I did all my training for the World Championship in Hawaii last year on my own. On long rides I had no wattage plans, time frames, efforts planned – nothing. I just rode by instinct. I went fast when I felt good and slow when I felt tired. One ride was four hours at 160 watts on my Computrainer watching movies. This was incredibly low, as my average for the race was 270 watts. That’s
all I could do to keep from becoming stressed. I had a great run off the bike, though. Go figure.

Look, on some rides, your energy levels can change several times throughout, so don’t become so regimented that you cannot adapt. Go with your instinct, and keep your brain out of it. Stay controlled, content, and stress-free. Good luck. 220

Australia’s Pete Jacobs is the 2012 Ironman World Champ and an exclusive columnist for 220. His ‘less is more’ approach has also helped him place 2nd in 2011 and gave him the third fastest marathon in the race’s history in 2010, a 2:41:05. See petejacobs.com for more info.