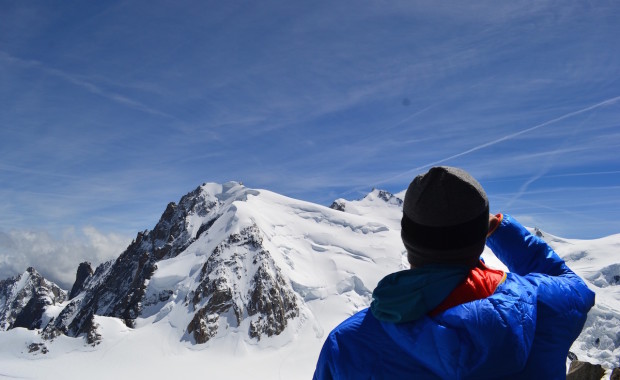 When I was asked if I were interested in taking part in Asics “Beat the Sun” in Chamonix, my answer was a definite yes. I love running, I love trail running even more, and could there be any more beautiful and lofty a trail than those around Mont Blanc. The event would be a relay of 3 professional athletes and 3 amateurs racing from sun up to sun down 150km around Mont Blanc.

5 teams from different regions of the world headed to Chamonix on an invite only basis, however there was mentions of plans to grow the event into an open one for all comers in the future, which would be great. My team was from Japan, Singapore, and Australia, making up the Asia-Pacific region.

A break was what I needed, after completing Ironman Port Macquarie and validating for Hawaii I was happy for a different goal, something to keep me moving but take me away from swim and bike and the pressures and fatigue of training for a triathlon race. So I ran with Jaimie and the dogs as I recovered from the Ironman, but was still pretty tired so wasn’t doing too much. At this time I got my results back from health tests and the main problems found were very low Zinc, and unhealthy level of bad parasites in my gut. Antibiotics and supplements followed and I’m hoping things keep improving.

Jaim and I headed over to Europe 12 days early for a proper overseas holiday. We travel quit a bit together, but that is mostly just for races, we rarely get time away from both our jobs (actually never, even this trip still needed time out for emails etc.). We ran everyday while we toured through Europe, running early before anyone else was up, visiting markets and landmarks along the way, then walking all day long sightseeing and eating, and then more walking for dinner and up till late (sun doesn’t set till after 10pm!). It was good cramming for the upcoming event, as I hadn’t run that much in a week for a looong time! I’m very lucky to have Jaim as a wife who loves running as much as I do, and is happy for me to lead the way in a foreign city even when I’m not sure where I am but think there might be a market or a place of interest somewhere ahead. We had great adventures on our way to Chamonix!

We arrived in Chamonix ready for a few days rest after our holiday, and we did get one day of rest before it was full steam ahead with the events media, luncheons, dinners, and a little sightseeing in the Alps. We got to know our teammates and the other runners from the 4 other teams – Nth Europe, Sth Europe, Americas, Africa – and made some good friends quickly. Luckily everyone was nice and got along really well, since on race day we would be spending all day with the team members from the other regions who shared the same run legs.

My day started about 5:30 when I headed to the start line for 5:44am sunrise and race start. I cheered on from the sidelines as my first leg was the 4th in the relay, then I headed to our minivan for an hour trip to the first drop point. My team was in 4th as I started my leg in chilly conditions. After 100m on flat I hit the first incline, and I was floored. I wanted to stop immediately, I had no ability to run up the hill, especially not at this altitude (1500m), but I had to keep pretending to jog until the last spectator was out of sight. I had heard the last team leaving the checkpoint a few minutes after me and feared I’d be caught by Holly Rush (UK) from Nth Europe, surely no one else was walking as much as I was! On the flat sections I felt ok, and ran solid to make up for the walking, but as soon as it inclined just slightly it increased the effort 100 times. But as it got steeper and became more like scrambling with my hands over rocks and up mini eroded gully’s on the path I saw a competitor ahead of me, and then as we reached the highest point at 2500m I caught Iazaldir Feitoza (Brazil) from team Americas and followed him across the top of the ridge across snow patches spotting wild mountain goats and eagles and the most amazing views I’ve ever seen.

I was feeling good running on the flat, even at 2500m, but then it started going downhill….and Iaza was an animal downhill. I wanted to prove to myself I was competitive against these trail runners so I wasn’t going to let him get away, even if the speed was so ridiculous I was lightheaded and the ground was blurry and my quads were screaming as they slowly shattered into a million pieces. Finally the end was in sight, and I was very relieved as my legs were smashed and my lungs were hurting and I had a horrid cough from the air and the effort. It wasn’t long before Holly arrived and we jumped in the van for a 3+hr drive to the next checkpoint.

At that point we hadn’t been able to each much straight after the hard run, and we couldn’t eat in the van while we were trying not to be car sick around all the bends along the road. Some of the trip was entertaining as Genis Zapater (Spain) Team Sth Europe is a real character full of energy, but even he succumbed to the long tiring day it was becoming and shut down for a while. We got to the next stop and stretched our legs, through rocks in the river, and waited. Then we had to move another 2km up the road, to a different checkpoint area, making our next run 2km longer in the process!

Johnny Young (south Africa) from Team Africa was the first to start our second (now) 18km section. We all stood around nervously waiting as the updates we had gotten were proven incorrect when Johnny was tagged, so we had no idea how long till our runners would turn up with 100m notice. As it turned out I headed off 4th again, way too far behind to think I could catch anyone this time but I still went crazy on a gentle fast downhill with a few steep sections to really smash my legs again. Some of it was on asphalt (road), and by the time I got to about 12km my legs were really suffering and I was slowing a bit. A few km’s later and it started on the 4km uphill to the finish. I walked a lot of this, my legs were so tired that even the slightest uphill reduced me to a walk. The last km was fairly flat and with camera crew and spectators I had to run, but it was an Ironman shuffle with lots of pain.

Those last few km’s I was thinking about the lack of food and drink I’d had since the first run. And that first run was about 1hr 40mins of the most intense effort I’d ever done in a running race. Then backing up after no recovery to run as hard as I can a second time (because I had to go out as hard as I could and see how long I’d last, it was too fun and competitive not to haha). I crossed the line completely spent, my body was a wreck. I grabbed a couple of sugary drinks and changed out of sweaty clothes into something warmer as it was getting cold again. I felt for my team member Kota Araki (Japan) who I passed the relay to after each of my legs. He is a very good professional trail runner so he got the longest hardest sections, and I’m very glad I wasn’t doing those ones. I hadn’t heard from Jaim all day, who had sections that weren’t either side of mine, and when I got back to the hotel in Chamonix at 7:30, 13½hrs after I’d left I was buggered, and happy to see Jaim and catch up on how the rest of the team had gone. After a short break to shower, Jaim and I headed back to the finish line to await Team Americas and Southern Europe and see them beat the sun. For a while we thought out team might make it too, so Jaim, Shingo Shintani (Japan), and Andy Neo (Singapore) headed out along the course to help bring Winston Ng (Singapore) home. As the sun set (9:44pm) my team was still coming in, we missed by 18mins.

It was one of the most amazing runs I’ve ever done, one of the best team experiences, and one of the toughest days I’ve ever had. I met some incredible athletes, and made some good friends who I look forward to seeing again, and following their results around the world. Asics spent a lot of time and energy putting together this unique event and it showed. The experience was unforgettable and a big valuable point of my life in 2015. Thanks to everyone who made it possible, those who I met along the way, and for those who showed me a part of the trail running world.