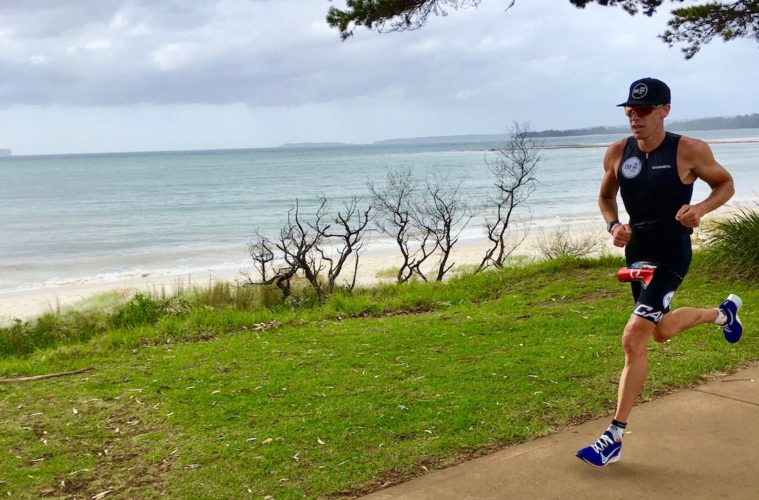 My first race in 15 months, my first race I’ve finished in a lot longer than that… I can’t even remember…I DNF’ed 2017 at Kona and Busselton IM, also at Ironman 70.3 Vietnam (gut bug), and no idea what the last race I finished was…

..Anyway, after consciously deciding not to race last year (2018) and take time off until I could put more pieces of my health puzzle together and be sure things were going better than the previous few years, I was excited to race Huskisson long course (half distance this year for the first time). It’s a race I’ve had success at previously and raced (and beaten once or twice) Craig Alexander who was lining up again, along with a field of young gun up and comers (like I was once) and a few solid athletes including 2018 Kona 7thplace getter Joe Skipper.

I was trying a lot of things for the first time. The more I eliminate from my diet the more sensitive I become to said items (as happens to most of us), so I could no longer rely on honey as it was giving me stomach cramps in training. So a new trial on race day (don’t do what I do haha) with nutrition proved to work well and no gut cramping and fairly even “energy” (let’s call that “perceived blood sugar levels”).

My lack of riding in 2018 has been a slight issue on the comeback trail, and my bike strength and fitness is well behind others, and I knew it would be, but I wanted the experience of racing (it has been a long time) and seeing what I can get from my body and mind even when I’m behind and just racing for myself.

I led out of the water, 3rdonto the bike, and could only briefly hold enough power to stay with each competitor for a short time as they came past me, before I’d need to drop the power, my heart rate a little, recover, and push again. That’s just how I’m riding at the moment – my fitness is good so I can recover quickly, but I can’t hold sustained high power, so lots of work to do.

I gave everything I could on the bike to still lost 7 minutes to Craig, who was off the bike in 2nd/3rdplace. But I felt good. I felt ready to run. I haven’t had that feeling in a race for years. I felt young again. Sure I wasn’t fast on the bike but I gave everything, and was still ready to run and ran well as I headed out of transition.

It felt like it used to when I was younger and my health was not yet a major issue. I could always run well off the bike even if my legs couldn’t ride any harder. It was a great feeling.

That lasted about 11km’s. haha. I ran a good pace, made up a couple of spots into 6th, and then my legs started to feel the effects of running harder and faster than anything I’ve done in training for longer than a minute or two. I backed off and tried to conserve so I could enjoy it a little, but a few days later, now, my quads still have some DOMS (delayed onset muscle soreness). I really enjoyed the last km. 5thplace was still running well so I could not entertain the idea of catching him, and was happy to finish and feel ok, and have got a performance out of my body that I thought it could do.

So basically everything went as well as I could have hoped with the training I’ve done, the many things I’m still learning and testing and improving, and the work physically I’ve still got to do in training after such a long break.  I’m looking forward to seeing the next level of improvements in about 7 more weeks at Challenge Melbourne (half distance).

Thanks Elite Energy for another great event, it is such a beautiful and relaxing place (and race) in Huskisson. It was great to add some more good feelings and memories to a race I’ve got so many at already.

Onwards and upwards. There’s lots of work to do and things to learn!

Congratulation to everyone else who raced over the weekend, especially Jaimielle who won her age group and finished 5thfemale overall! … Yes I got beaten in two categories by my wife haha . oops I better get back those chores now  haha. bad joke 😉