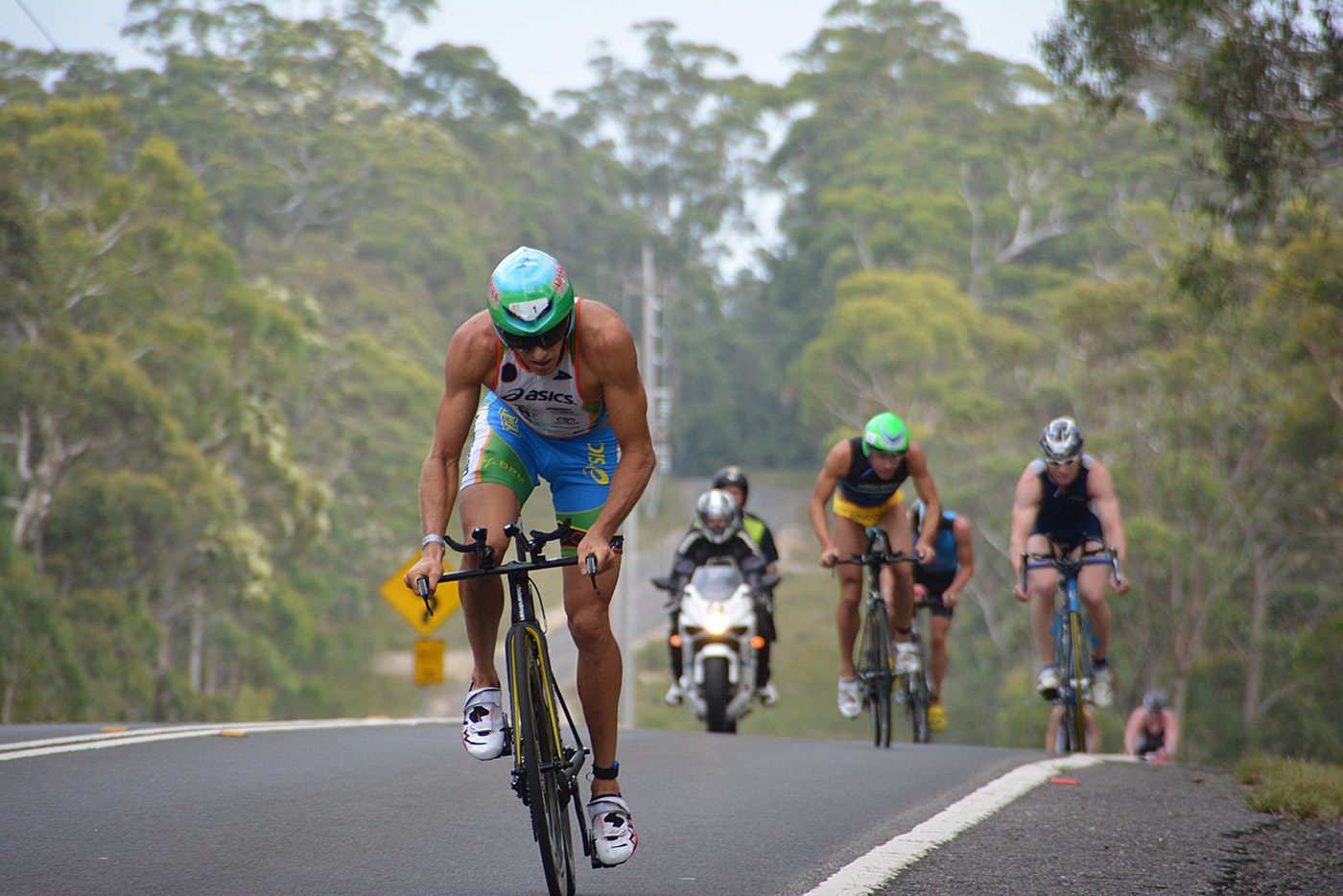 Even with 4 hairpin turns around witches hats, and 4 times up a little rise, it’s a fast 20km run. It’s follows the coast along a concrete walking path and is beautifully scenic, with a few very small rolling bumps that give you a little boost on the downside. Now I’m not saying I broke any records and did anything unbelievable, but what I did do was run way beyond what I have done in training, all by being in the moment.

A week ago was the end of a very solid bike week that I had done by feel, as usual, and I felt good so I did a lot, with a few slow runs off the bike. The week of this race went very quick and I did more swimming than usual, one long ride with a run off the bike, and everything else was pretty short and easy. However I could probably make a case that my legs were still a bit fatigued from training.

However I went down to Huskisson to win. I wasn’t there to do a training day. I was there to start my 2014 season, my new campaign, with a new approach, with a win. I couldn’t tell you what I did in training in January as I don’t keep a diary and don’t follow a plan, but I must have been doing something because I don’t remember doing nothing, nor was I building a fence and garden as I did in December. So I felt comfortable with where I was, which was right there on the start line.

I swam, exiting the water near the front and was surprised in a good way that Tim Reed was there next to me getting his helmet on. He has improved his swim and now the race was on! I had a shocker transition losing my helmet strap inside my helmet and lost several seconds that I had to make up in the first 5km on the bike. It whittled down from 5 guys to three. Sam Appleton was riding strong taking turns on the first lap, then Reed and I attacked each other on the second lap, then we realized it was futile and we were a bit tired on the third lap.

T2 was fast, and we three left transition together, but very quickly Reed surged, and I was shocked. I normally like to ease into the run, but I had to relax and go with it. I sat behind Tim and had to block all thoughts from my mind about how I haven’t run much, Tim’s race fit, I’ll probably fatigue at this pace etc. etc. and just ran in the moment. I forgot about the hard ride we’d just done, I forgot about the training I hadn’t done, and I worked hard at relaxing every muscle in my body and blocking every thought I was having. I found my breathing was much more in control the Tim’s, and as I found my rhythm I took the lead, then Tim took it, then me again, and as we hit halfway and a little incline I took advantage of believing I had the capacity to increase my output more than Tim (since he was already breathing hard), and it worked. I extended my lead and broke that invisible rubber band that had held us together.

I would guess that we ran the first 10k in 33mins, then I ran the second 10k in 34mins. I think it was a fair 20k, just a fast 20k. Running relaxed was incredible. Relaxed but under pressure was a unique experience that I have actually been specifically training. If you accept that the mind controls every reaction in your body (which you would accept easily if you saw the information to prove it) then you start to approach things differently, and every moment of life becomes a moment to practice being in the moment. You are not defined by your past, by the training you have or haven’t done. You are what you are in this moment. Putting into place what I had trained to do (relax while running) was what helped me win. Now I’ll recover, then add some more physical load to my run training and the next race, Challenge Batemans Bay on March 16, with my mind and body abilities that little bit stronger, I could be that little bit faster ☺

A big mention how proud I was of my mum, who has worked really hard to overcome years of illness and injury that forced her to stop triathlon 10 years ago, and finished the Sprint Triathlon in great shape on the Saturday. Looking forward to many more weekends racing with mum.

Thanks to Elite Energy who run an amazing event and have built up a great tradition down there, and I’m very happy I kept my tradition of good results at this race going. I can’t wait to do it all again in Bateman’s Bay in a few weeks, and also watching mum and everyone else race the sprint, enticer, and kids triathlons on the day before I race. I had a blast handing out hundreds of kids medals and I enjoy getting a photo with them after they finish, even if they don’t all know who I am, their mum and dad might tell them one day 😉